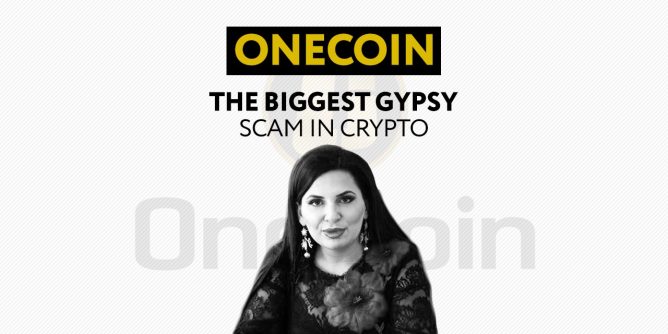 In 2014, Ruja Ignatova and Sebastian Greenwood launched OneCoin in Sofia, Bulgaria. The objective was for OneCoin to surpass Bitcoin in terms of scale and innovation, becoming a new type of revolutionary currency. It checked all the boxes that a “better” coin must have:

In reality, it was nothing more than an MLM business built on selling plagiarized educational products and utilizing the “coin” as a front to attract people in.

According to numerous reports, OneCoin was a Ponzi scheme as early as 2015. Its popularity, on the other hand, only increased. This culminated in Ruja Ignatova, who presented herself as a highly intelligent entrepreneur with a PhD and marketed herself as “the real deal,” gracing Wembley Stadium before 90,000 people in 2016.

At its 2016 peak, OneCoin was the second-biggest cryptocurrency by market capitalization. Despite warnings from central banks against investing in it, the founders continued to live extravagantly. Ruja Ignatova reportedly spent lavishly on real estate and fine art in London and had entertainment stars perform for her birthday at private parties.

In 2017, the German financial authorities issued a cease and desist order. Ruja Ignatova vanished in the fall of 2017, failing to show up for a meeting of OneCoin promoters in Lisbon and then disappearing. She didn’t turn up for a gathering of OneCoin promoters in Lisbon in the fall and has not been seen since. Her last appearance was on October 18, 2017, when she flew to Greece.

In 2018, the OneCoin headquarters were raided in Sofia, Bulgaria. The same year their co-founder Sebastian Greenwood was arrested in Thailand. Although he had prior experience as a scam artist before launching OneCoin.

In 2019, Konstantin Ignatov, the new CEO after his sister’s disappearance, was arrested in Los Angeles. He is currently facing charges related to money laundering and wire fraud in the United States.

Ignatova has been added to the top ten most wanted list by summer of 2022. However, neither her brother nor co-founder knows where she is located.

In several countries, numerous lawsuits against OneCoin and its founders are still pending. German authorities have launched a case against OneCoin, and both Sebastian Greenwood and Konstantin Ignatov face legal proceedings in the United States. Despite being a fraudulent currency, the false cryptocurrency has allegedly been linked to money laundering and even terrorist financing. The economic damage is expected to be between $4 billion and $15 billion, according on experts.